0:00/???
October 6, 2009—Katie Pearlman has a new album. It is called “We Make This” (Mohawk Records). I believe we hear in this record Katie’s renewed commitment to songwriting. There are ten songs gathered there, all by her, all good. The cohesive band sound remains as a foundation feature, with Jeff Pearlman on keys, Joe Cesare, electric guitar, Tom Bowler, bass, and Katie on drums and some acoustic guitar.

The lyrics are centered around personal relationships and their entanglements, everyday life and its little trials and victories, and the feelings one can have in the middle of all of it. They engage.

The band sounds good, loose and Jamband like in a classic sense, with some of the ambience of the Dead. Short, incisive yet spirited solos by Jeff and Joe pepper the songs and give them leverage. Katie's drumming sparks the ensemble and gets it grooving.

Ms. Pearlman's voice is a real vehicle. There’s a soulful quality I’ve remarked on in earlier reviews, and it really puts the whole thing together. There are times I recall the old band Mother Earth in its rootedness when I listen to Katie’s music. Katie has a different sound than Tracy Nelson did in that band, but there’s a certain common feel there. On the other hand, there’s nothing really retro about her music. It’s more about timelessness.

“We Make This” is plush, wall-to-wall Katie Pearlman at her best. It nicely showcases Katie’s talent and gives plenty of listening pleasure. I hope it brings her much success. 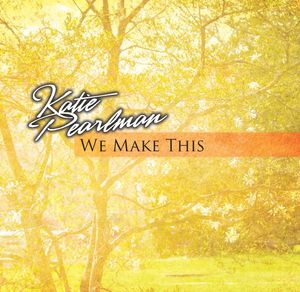